You are reading the documentation for version 2 of FoalTS. Instructions for upgrading to this version are available here. The old documentation can be found here.

Swagger UI is a graphical interface to visualize and interact with the API’s resources. It is automatically generated from one or several OpenAPI documents.

This example shows how to generate a documentation page of your API directly from your hooks and controllers.

The first thing to do is to add the @ApiInfo decorator to the root controller of the API. Two attributes are required: the title and the version of the API.

Then each controller method can be documented with the @ApiOperation decorator.

Beside the @ApiOperation decorator, you can also use other decorators more specific to improve the readability of the code.

Don't Repeat Yourself and Decorate Sub-Controllers#

Large applications can have many subcontrollers. FoalTS automatically resolves the paths for you and allows you to share common specifications between several operations.

The addition of these decorators can be quite redundant with existing hooks. For example, if we want to write OpenAPI documentation for authentication and validation of the request body, we may end up with something like this.

To avoid this, the framework hooks already expose an API specification which is directly included in the generated OpenAPI document.

You can disable this behavior globally with the configuration key setting.openapi.useHooks.

You can also disable it on a specific hook with the openapi option.

Once the controllers are decorated, there are several ways to generate the OpenAPI document.

Documents can be retrieved with the OpenApi service:

from a shell script#

The createOpenApiDocument function can also be used in a shell script to generate the document.

Note that this function instantiates the controllers. So if you have logic in your constructors, you may prefer to put it in init methods.

Another alternative is to use the SwaggerController directly. This allows you to serve the document(s) at /openapi.json and to use it (them) in a Swagger interface. 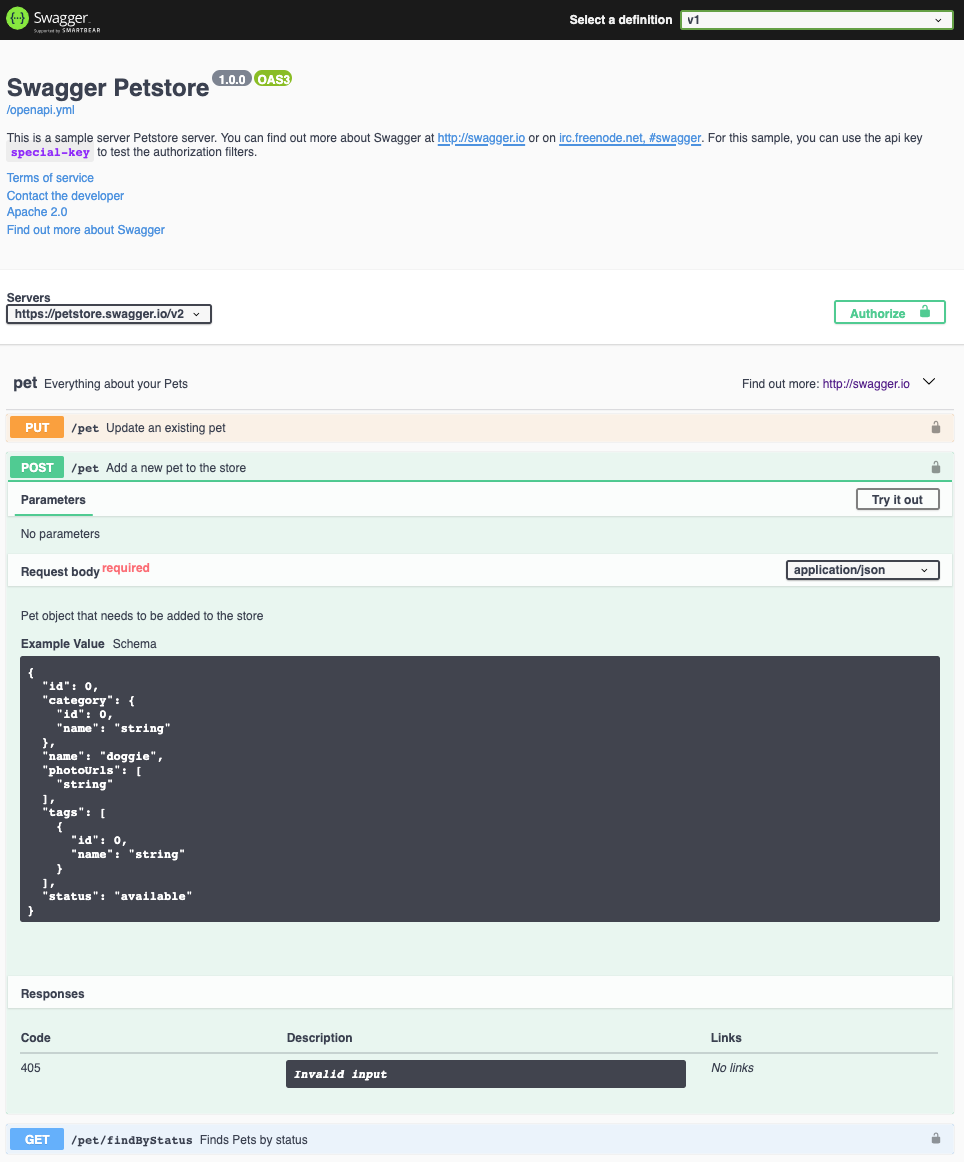 Opening the browser at the path /swagger will display the documentation of the ApiController.

If needed, you can also specify the URL of a custom OpenAPI file (YAML or JSON).

Some applications may serve several APIs (for example two versions of a same API). Here is an example on how to handle this.

If you prefer to write manually your OpenAPI document, you can add an openapi.yml file in the public/ directory and configure your SwaggerController as follows:

Example with the root controller

Example with a subcontroller / a method

OpenAPI allows you to define and reuse components. Here is a way to achieve this with Foal.

The @ApiDefineXXX decorators can be added to any controllers or methods but they always define components in the global scope of the API the controller belongs to.

The schemas defined with these decorators can also be re-used in the @ValidateXXX hooks.

Generate and Save a Specification File with a Shell Script#

This example will throw this error.

Error: Templated paths with the same hierarchy but different templated names MUST NOT exist as they are identical.
Path 1: /products/{id}
Path 2: /products/{productId}

OpenAPI does not support paths that are identical with different parameter names. Here is a way to solve this issue:

Swagger UI options can be extended using the uiOptions property.