FoalTS
This is documentation for FoalTS 1.x. This version will reach end-of-life on May 31, 2021. Until then, critical bugs will be fixed but no new features will be added.
For up-to-date documentation, see the latest version (2.2.0 (latest)).
Version: 1.x

In advanced applications, access control can be managed through permissions and groups.

A permission gives a user the right to perform a given action (such as accessing a route).

A group brings together a set of users (a user can belong to more than one group).

Permissions can be attached to a user or a group. Attaching a permission to a group is equivalent to attaching the permission to each of its users.

Examples of groups are the "Free", "Pro" and "Enterprise" plans of a SaaS application. Depending of the price paid by the customers, they have access to certain features whose access are managed by permissions.

Replace the content of the new created file src/scripts/create-perm.ts with the following:

Then you can create a permission through the command line.

Groups are used to categorize users. A user can belong to several groups and a group can have several users.

A group can have permissions. They then apply to all its users.

Replace the content of the new created file src/scripts/create-group.ts with the following:

Then you can create a group through the command line. 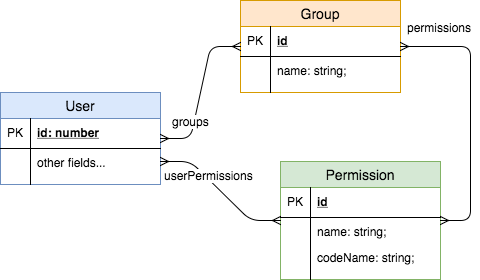 The hasPerm(permissionCodeName: string) method of the UserWithPermissions class returns true if one of these conditions is true:

Creating Users with Groups and Permissions with a Shell Script (CLI)#

Uncomment the code in the file src/scripts/create-user.ts.

Then you can create a user with their permissions and groups through the command line.

Fetching a User with their Permissions#

If you want the hasPerm method to work on the context user property, you must use the fetchUserWithPermissions function in the authentication hook.

This requires the use of fetchUserWithPermissions.

The classes Permission, Group and UserWithPermissions all extends the BaseEntity class so you can access its static and instance methods.

Get All Users with a Given Permission#

The class UserWithPermissions provides a static method withPerm to get all users with a given permission. It returns all users that have this permission on their own or through the groups they belong to.